History of the construction

In about 1760, the Real Maestranza de Caballería undertook the task of constructing a stone building to replace the temporary wooden bullrings that had previously been erected on the same site. Thus began a construction process that would last for 120 years, involving different stages and overcoming serious difficulties before the work was completed in 1881.

Following the receipt, in 1730, of the royal privileges to construct a bullring, four construction periods can be distinguished: 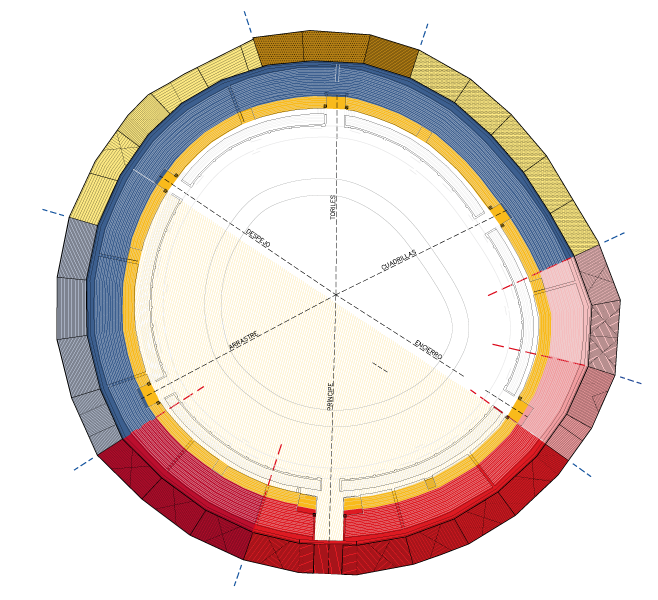 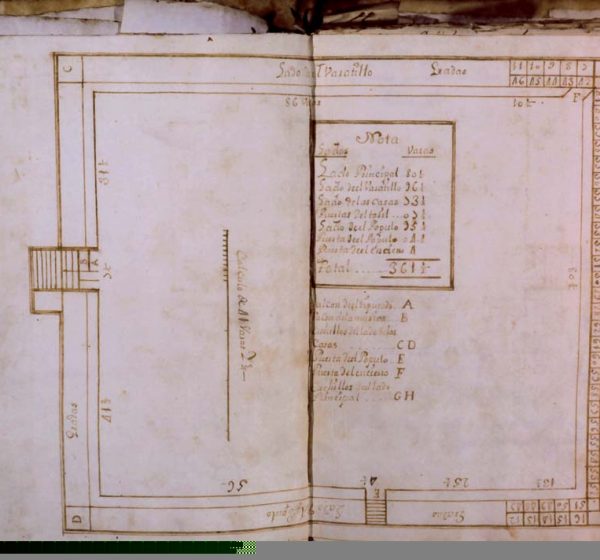 Plan of the first wooden bullring, c.1731. It is the oldest depiction of a Real Maestranza bullring. RMCS Archives.

1730. Following the grant by Felipe V of the privilege of holding bullfights, the Real Maestranza decided to build its own bullring in a part of the Arenal which is near  the current site between the convent of the Pópulo and the so-called Baratillo hill; it was made of wood, and rectangular, like the square of San Francisco, the main square of Seville where public festivities were held. It had high and low balconies as well as platforms or terraces. (Plan of the first wooden bullring, c.1731) 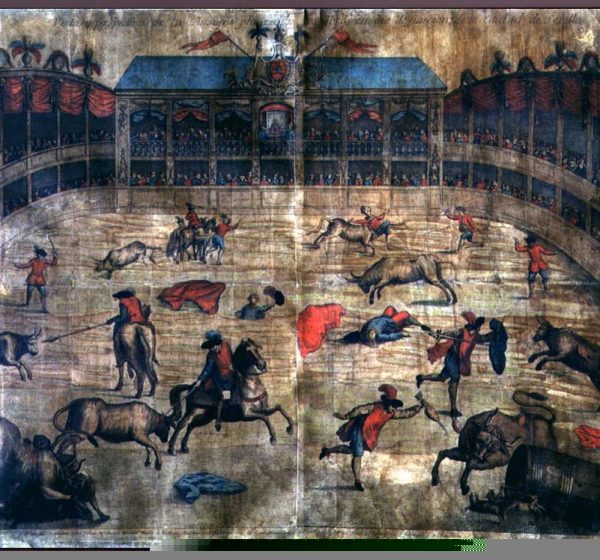 View of the second wooden bullring of Seville. Anonymous, c.1733. Noteworthy is the effigy of the Infante Don Felipe, Hermano Mayor (President) of the Real Maestranza, on the Prince?s Balcony. Engraving. RMCS Archives.

The primitive bullring was dismantled in order to construct a new wooden one, but this time with a round, chamfered shape, because experience had shown the danger of fighting in this bullring because of its four corners. Clearance of the Baratillo hill began, and the bullring was erected on this conveniently appropriate site. Its seats were similar to those of the previous bullring, with balconies and boxes preceded by a bench or screen.

To show his appreciation, the King granted important and decisive privileges to the Corporation, which in 1739 erected a third bullring, consisting simply of balconies and platforms, more similar to the current bullring, and with four gates, in addition to that of the bullpen.

The Corporation began to build  series of stone annexes, attached to the wooden bullring, including butchers’ shops, stables and, later, houses and warehouses, shaping the future appearance of the bullring, delimited by various constructions. (Picture of tiles referring to these works. Carbajal, p20).

A fourth wooden bullring was erected, coinciding in its arrangement  with the previous one (which had been dismantled in 1756 after bullfighting was prohibited in 1754), and it was this one which survived while the stone one was being constructed. 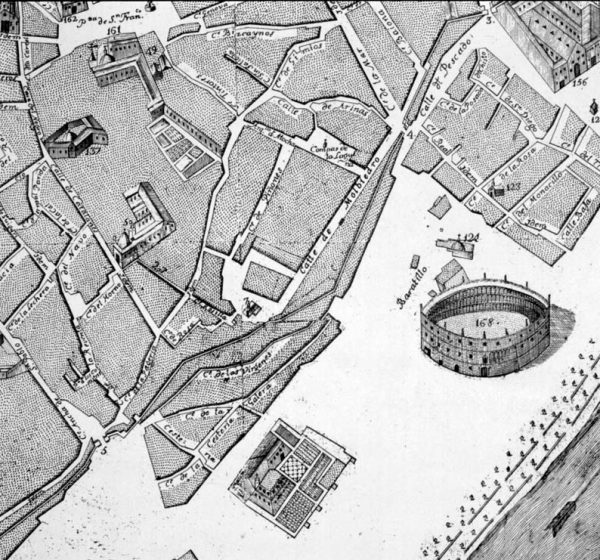 The first map of Seville, created by order of the Assistant Pablo de Olavide. F.M. Coello and J. Amat, 1771. Engraving. University of Seville.

In order to put an end to the costs and complications of an ephemeral type of architecture, the Real Maestranza began the construction of the “material” bullring, in accordance with the plans of Francisco Sánchez de Aragón. Between 1761 and 1762 three ochavas were constructed. In the final months the management of these works was the responsibility of Pedro de San Martín.

A second stage was begun, introducing variations of the original plan. The original designs of the façade, the Prince’s Balcony and the exterior were approved, as was that of the covered upper gallery. Until 1766, six-and-a-half more ochavas were built, under the direction of Pedro de San Martín. That was the decisive stage, because the main section of the building was completed and the essential part of the internal and external appearance of the bullring was defined.

The works were suspended for 15 years because of financial difficulties.

Third stage of the works, during which one ochava which had been left unfinished was completed, together with the next one, seven balconies, five platforms and a store. The management was the responsibility of Vicente de San Martín, to whom the original design of the bullring was attributed for a considerable period.

The final stage of construction in the XVIIIth century, during which two more ochavas were erected, with their corresponding balconies, front rows and stores.

Carlos III prohibited bullfights anywhere in the country. There began a period of 60 years during which the works did not progress at all. The only work that was completed was some repair work in the part which was still wooden, and many adjustments. Some reforms took place during the project’s subsequent development, such as the reduction in the size of the arena in 1830, with the appearance of coverts to replace the gaps that must have existed in the burladero. It is possible that this reform gave rise to the seats in the alley known as cajones, first of wood and later of stone, which preceded the seats known today as barreras. 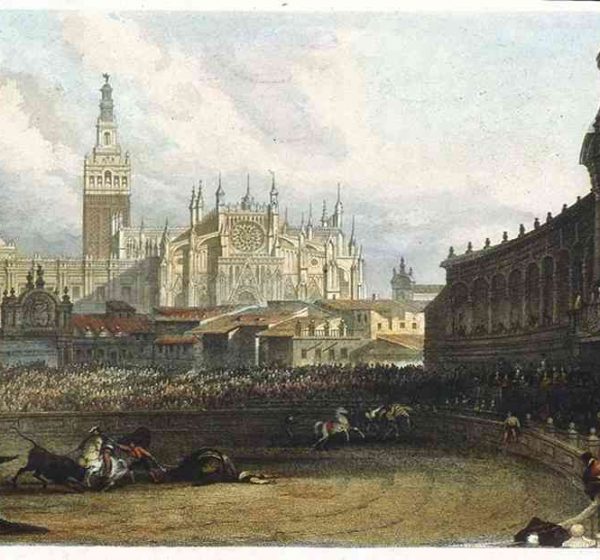 The post of Institution Architect was created, with the idea of linking with professionals of prestige among “the most important people in the City”. The first architect to be officially linked was Juan Manuel Caballero y Ortiz. The stonework was resumed, beginning with various stages of the lower platform, and most of the tendidos were finished in 1849.

Sixteen new balconies were made, to replace the wooden ones on the north side of the arena. In the spaces where there was no upper arcade, stands and temporary wooden seats were installed, to increase the capacity. 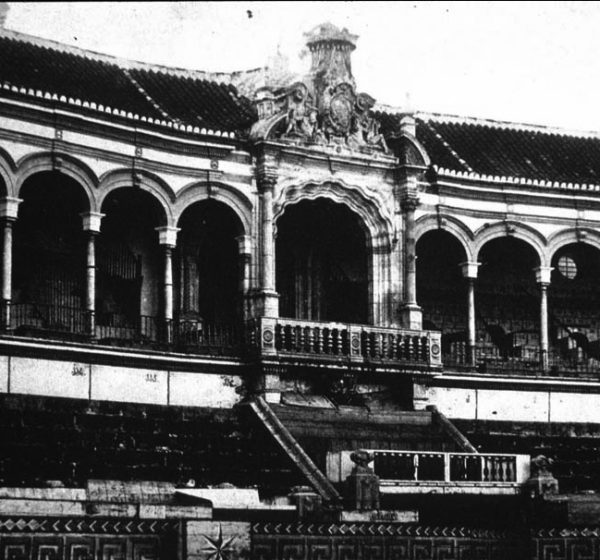 The Councillors’ Balcony and the two adjoining ochavas were constructed, eleven balconies in all. This work was directed by Juan Talavera y de la Vega.

A reform was carried out by Juan Talavera, consisting of reducing and clearing the arena, which was covered with albero, demolishing the stone boxes and arranging two rows of benches to replace them. 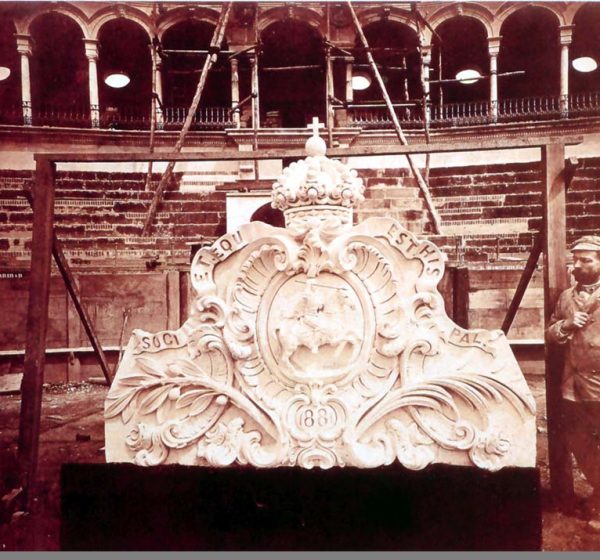 Shield for the Balcony of the Council, before being put in place. Next to it, the sculptor Augusto Franzi. J. Sánchez, 1881. Private collection.

The last major piece of work done by Juan Talavera consisted of finishing the upper arcade with the construction of the forty balconies that were lacking, twenty on each side of the bullpen area. Iron was used for the first time in this edifice. Important improvements were made to the building and its annexes: an entrance for the confinement of the bulls without their needing to cross the arena; an extensive stable, a tack room, the infirmary, the chapel and the bullfighters’ resting room; the slaughterhouse was improved, new storerooms were made under the front row of seats, and also several places for the sale of tickets. Plans were made to decorate the bullring. With this intervention, the construction of the bullring was complete. 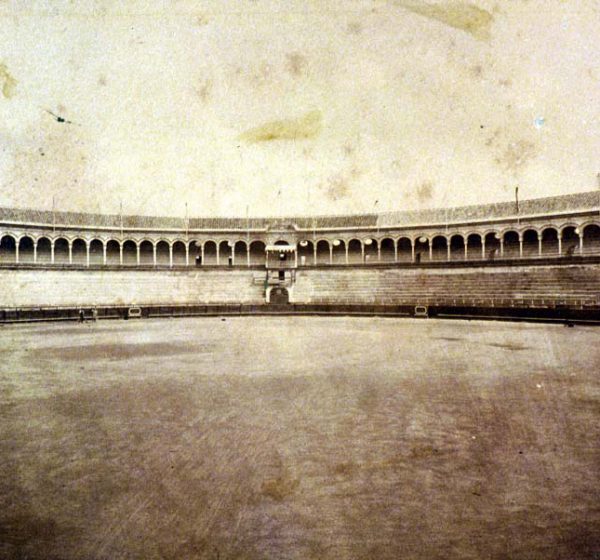 View of the bullring, 1881. Photograph taken by J. Sánchez on the completion of the stonework. RMCS Archives. 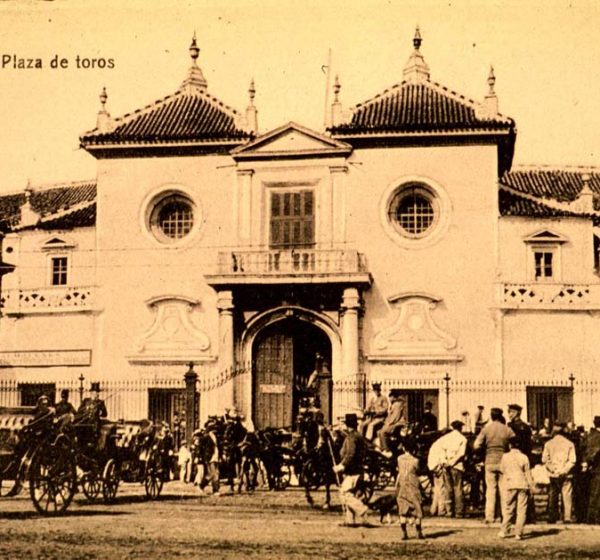 THE XXTH CENTURY, UP TO ITS PRESENT APPEARANCE.

Replacement of the former front row by a new one of exposed brick. This work entailed another contraction of the ring, the disappearance of the wooden box that preceded the Prince’s Box, and the installation of the splendid railing that came from the Convent of  Regina Angelorum. These works were carried out by José Sáez y López and Aníbal González.

The House of the Real Maestranza was built, designed by Aníbal González. The joining of the House to the bullring by means of an elevated passageway caused the Maestranza to relocate its box in the bullring, transferring it to the left of the main balcony. This passageway was extended in 1968 by Joaquín Barquín y Barón.

The building of the Chapel of the maestrante headquarters, an original design by Aurelio Gómez Millán.

It was decided to remove most of the storerooms and to create a lower circular corridor. This work was undertaken by Joaquín Barquín.

THE SPECIAL SHAPE OF THE SEVILLIAN BULLRING

The Royal Bullring is distinctive because of the irregular outline of its arena. It is well known that the fact that its construction took 120 years (1761-1881) had an influence on the deformations that are visible today, and on the variety and quality of the building systems used. The stage of construction which took place in the XVIIIth century (1761-1785) can be divided into two distinct phases.

In the first (1761-1766), the construction plan originally envisaged by Francisco Sánchez de Aragón was faithfully implemented. The arc of the ring that he described could be that of a circular bullring of thirty ochavas.

However, in the second phase (1781-1785), the circle began to be deformed when the bullring was constricted to conform to the plot of land available and to adapt the dimensions to the bullfighting on foot that was coming into fashion in that period. So Vicente de San Martín relocated the centre of the circle, and from the new centre described a circle with a shorter radius. The result was the well-known oval shape of its ground plan. Subsequently, in order to adapt to the area of a smaller bullring,  he relocated a new intermediate centre, as can be seen on the attached plans. 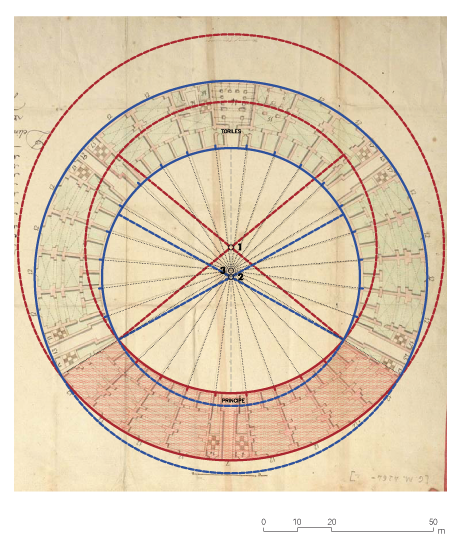