Since its origins, the Real Maestranza has undertaken a lot of philanthropic and social work, and has always attended to the needs of the many institutions that needed its help, such as the soup kitchens in Triana and the schools in Macarena, both of them Corporation foundations which were established in the time of Alfonso XIII.

The catalogue of annual contributions includes different associations and bodies connected with health, social welfare and education, as well as other institutions and fraternities of a religious and educational nature which provide help to the most needy, with special attention to matters connected with childhood.

Throughout its history there have also been numerous occasions on which the Real Maestranza contributed in special circumstances — such as epidemics, droughts, river flooding, victims of war and other disasters — whether directly or through donations, or by giving up its bullring for bullfights organized for such charitable ends. 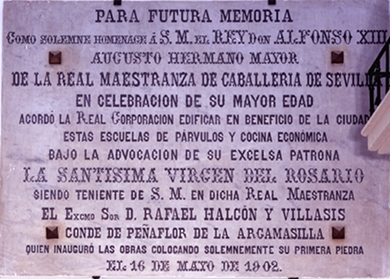