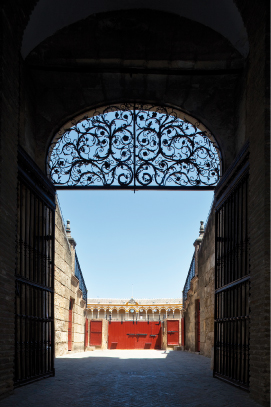 The Royal Bullring of Seville was built on a piece of raised ground near the River Guadalquivir, called the Baratillo Hill. When the bullring was erected, there were hardly any constructions in the vicinity. Today, apart from the area of the main façade, it is completely flanked by other buildings. The joined buildings together form an almost triangular block which is bounded by three streets: the Paseo de Cristóbal Colón, Adriano and Antonia Díaz. The bullring building, both externally and internally, has the shape of an irregular polygon, and consists of 30 unequal sides, the result of having been constructed over a period of 120 years.

The external appearance of the Baratillo bullring evokes a late-Baroque style of architecture, typical of the second half of the XVIIIth century, already pointing towards classicism, achieved with a character more graceful than monumental, and in which the main entrance dominates, with its lower structure of exposed stone, in contrast with the rest of the faces, which are coated, mainly with lime. The main gate is bounded by two turrets, with trabeated minor entrance paths — giving access to the boxes of the Maestranza and of the authorities — finished with curious ornamentation of concavo-convex shapes, foliated capitals, mouldings, vegetable motifs and what appear to be crowns.

The Seville bullring, because of its classical and noble architecture, its harmonious proportions and its tradition, is without doubt the most beautiful and suggestive of the Spanish bullrings.

The basic structure of the bullring consists of a first ring round the arena, composed of the barrera and the tendidos, and below which, in some areas of the ground floor, there are small rooms for storage or for public use; a second ring, which includes, in the high part, the covered stand, and on the ground floor an interior gallery for circulation and access, with the tendidos on one side and all the bullring services on the other (corrals, cuadrillas, skinning room, infirmary, etc).

These services are located in a third ring, in which there are steps leading to the areas in the covered stand; on the upper floor this third ring incorporates an area of large roof terraces with parapet and an external balcony which leads directly to the upper floor areas, and which in other parts is occupied either by structures belonging to the headquarters of the Real Maestranza de Caballería or by private homes. 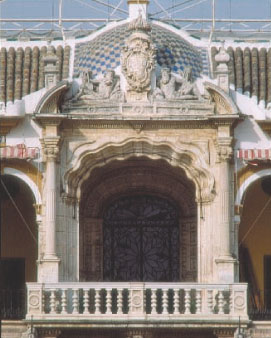