Opening hours for the visit

From Monday to Sunday

Sale of tickets for the tour.

Over 65 years old and pensioners

Childrens from 7 to 11 years old (accompanied)

Children from 0 to 6 years old (accompanied)

Prices for groups on request.

Group visits should be booked by this form.

In 2008, their Royal Highnesses the Prince and Princess of Asturias inaugurated the new rooms of paintings and bullfighting prints of the Art Bullfighting Collections of the Real Maestranza de Caballería de Sevilla on 21 November.

For illustrating the significance of a visit to the Royal Bullring of the Maestranza, few testimonies are more eloquent than the words of the architect Rafael Moneo, extracted from the XXIXth Pregón Taurino of which he was the author, and the guest of the Real Maestranza de Caballería de Sevilla: 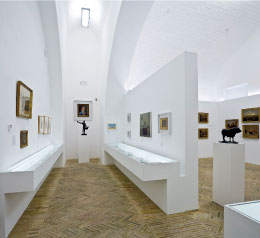 «The Maestranza is without doubt one of the City’s most beautiful monuments (…) one of those pre-eminent edifices which are able to confront alone the passage of time and which make Seville what it is. Is there, by any chance, a site more beautiful than that of the Maestranza?  Looking over the river, the Maestranza has seen the waters of the Guadalquivir flow past without feeling time passing. And if the Giralda brings cultures together, the Maestranza reminds us that there is always a place for the brave, and that our destiny is not decided.

That the Maestranza is and has always been the quintessential bullring, the one that best represents what the Festival is capable of providing, is something which no-one can call into question (…) it was always an architectural work with a life of its own.

Speaking about the architecture of the Maestranza means speaking about its proportions, about the relationship established between the stands and arcade and the arena. On entering the precincts of the Maestranza, one is always surprised by the spaciousness of its generous arena, which is certainly the reason why we feel as if we have been transported straight into open country, despite being aware that we are in fact in the heart of a metropolis like Seville (…) the Prince’s Gate is the unexpected parenthesis in the City which, as we have said, makes us feel again the air of the pastures where the bulls are raised, the open country.  In how many other bullrings does that happen? In none, I venture to say.

The arena continues towards the front rows so that the well-painted planks of the barrier forming the alley make it look like an elegant ribbon. A ribbon bounded by the pipeclay, and creating a colour tone which is very difficult to find in any other bullring. Pipeclay of the Maestranza. It is no small thing. It is the universe of the bullfighter, which is the way he feels it on seeing that its convexity brings to him the presence of what the poet called “the integrity of the planet” (…) The bullfighter feels the roundness of the Earth (…) Pipeclay of the Maestranza, on which all who wished to be bullfighters had to tread: Pepe Hillo and Pedro Romero, Paquiro and Cúchares, Frascuelo and Lagartijo, Joselito and Belmonte…» 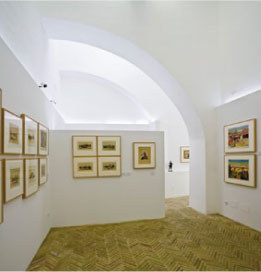 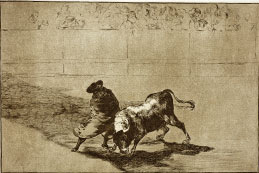 The extremely skilful student from Falces,
muffled taunting of the bull with his dodges. Francisco de Goya, 1815.  RMCS Archives.

The route through the tendidos of the bullring is complemented by its Art Bullfighting Collections, which is composed of two clearly distinct sections. The first section that one visits contains an exhibition of paintings and a selection of the bullfighting prints which belong to the Real Maestranza’s collection, one of the largest in the world. These rooms were inaugurated by their Royal Highnesses the Prince and Princess of Asturia on 21 November, 2008. 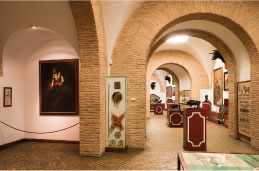 The Paintings Room contains a collection of oil paintings from the XVIIIth, XIXth and XXth centuries which constitute an outstanding bullfighting art gallery, principally from the Romantic Period.  Scenes in the countryside and in the bullring, bullfighters and personalities connected with the bullfighting world are captured in works by Gutiérrez de la Vega, Eugenio Lucas, José Elbo, Joaquín and Valeriano Domínguez Bécquer, José Jiménez Aranda, Horace Vernet, John Philip and Nicolás Ruiz de Valdivia, among others. 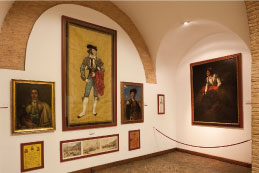 In the anteroom are books and objects, written notes of Mariano Benlliure, oil paintings by artists such as Roberto Domingo, Mariano Fortuny and Carmen Laffón. On the opposite wall there is a display cabinet containing prints from the famous series “Pepe Hillo’s Art of Bullfighting” (1804). Above it, an anonymous XVIIIth century portrait of the legendary bullfighter Joaquín Rodríguez “Costillares”.

The Prints Room houses a select collection of prints, lithographs and engravings. Almost all the historical bullfighting series of the XVIIIth and XIXth centuries are represented, including a picture of one the first recorded bullfighting events, Corrida caballeresca, by J. Stradan (1578). The exhibition begins with a complete series, by Luis Fernández Noseret (c.1790) and continues with examples of that of the royal painter Antonio Carnicero (1790), whose later influence reached as far as Goya. There follow prints belonging to Romantic series, and signed by European artists such as John H. Clark (1813), Victor Adam (c. 1834), Wilhem Gaïl (c. 1835), W. Lake Price (1852), Gustavo Doré (c. 1863) and Pharamond Blanchard (1835). 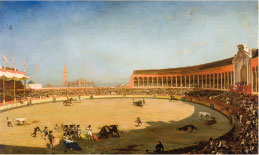 The Dukes of Montpensier presiding over a bullfight in the bullring of  Seville
E. Ginain, 1852. RMCS Archives.

In the adjoining room twelve prints of Francisco de Goya’s “Tauromachy” are exhibited, belonging to the third edition of the legendary series of etchings that was completed in Paris in 1876.

The route of the visit leads one to the second, and oldest, section of the Art Bulfighting Collections. It was inaugurated on 5 April, 1989, by H.R.H. the Countess of Barcelona. In it, a sequence is set out, beginning with the origins of the Real Maestranza, with a space devoted to the games practised by the nobility in the XVIIth and XVIIIth centuries, and a large display cabinet containing a varied representation of the bullring workers of the XVIIIth century: drummers, hamstringers and lancers. Outstanding are a silk poster of 1740 and a maestrante’s uniform ceded by H.R.H. the Infante Don Carlos de Borbón Dos Sicilias y de Borbón.

Then follows a series of XIXth-century paintings of the subject of bullfighting, including “Goring to death of Pepe Illo”, by Eugenio Lucas Velázquez (1817- 1870), and a section devoted to bullfighting in the period of Belmonte and Joselito el Gallo, with works in bronze by Mariano Benlliure and other artists, as well as various bullfighting posters.

The route ends with the most modern of the collections, a varied assemblage on the theme of bullfighting: bullfighters’ suits, capes, posters, bulls’ heads and paintings by contemporary artists.

The visit continues through the Court of Horses to a place of high spirituality, the Bullfighters’ Chapel, which is dominated by an altarpiece of the “Virgin of the Rosary”, who is the object of great devotion of the bullfighters, and to whom they have made numerous votive offerings. 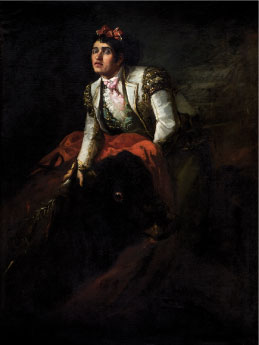